Does the Birth Control Pill cause PCOS?

Polycystic ovarian syndrome (PCOS) is a common hormonal problem. It affects one in ten women, and the percentage may be even higher among young women. Its principle feature is a lack of regular ovulation. It causes facial hair and infertility. The incidence of PCOS is on the increase and this trend to an epidemic has not yet been explained.

There is good evidence that many cases of PCOS are caused, in part, by insulin resistance, a metabolic problem that also causes weight gain and diabetes. This is bad news for Pill users because as discussed above, the Pill actually worsens insulin resistance. In 2003, the Journal of Clinical Endocrinology & Metabolism published an article called 'A Modern Medical Quandary: Polycystic Ovary Syndrome, Insulin Resistance, and Oral Contraceptive Pills'. (1) The Pill has been standard treatment for PCOS, and yet, perversely, it appears to worsen the metabolic problem that is at the root of the condition. The authors say: ...what has been lacking is a critical examination of whether oral contraceptives might...exert adverse metabolic effects with long-term consequences...

I propose that the Pill may have made additional contributions to the epidemic of PCOS. Many young women have taken the Pill since they were in their early teens. This was done, and yet studies have shown that the Pill causes permanent hormone changes, even once it is stopped.   Most doctors agree that it can take 1 to 2 years for normal menstrual cycles to resume after stopping the pill (2,3,4). Why should we not consider a history of Pill use when it comes to PCOS? Strangely, this question has not been asked in the medical literature.

What is even more worrying is that the hormonal damage from the Pill may not be limited to one generation. A new understanding of genetics has shown that the lifestyle of our parents and our grandparents can affect our health in this generation. In particular, the effects of hormone disrupting chemicals such as pesticides have been shown to cross generations. (5) The Pill definitely qualifies as a hormone disrupting chemical. Young women today have inherited their genes from a mother and grandmother who used the Pill. Has there been a cross-generational effect? No studies have been done to answer this question.

For a fuller discussion of PCOS, see our PCOS article. 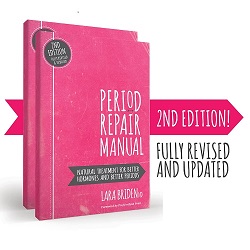